A fourth-generation family dairy farm in Taranaki – home to Te Matai stud and a pedigree Ayrshire herd – is forging ahead with improvement ahead of a significant milestone next year. In 2023, the Honeyfield family will reach their 100th year on the farm, north of Waitara. Farming the property today are Stuart and wife Delwyn, with son Scott who works full-time in a contract milking role. It was Stuart’s grandfather who first settled on this Taranaki farm in 1923. Scott is now the latest family member to have moved into the old farm homestead, (Stuart’s parents having recently left for a retirement village). Rounding out the farm team this year is a new farm assistant, Charlotte.

The herd of 360 cows, predominantly pedigree Ayrshires, produced 141,700kgMS this last season, with heifer replacements and 100 beef calves reared and grazed on the 161ha dairy platform. A significant on-farm investment this season, with obvious flow-through benefits, has seen new automatic cup removers installed in the shed. Somatic cell counts are down 20% on last season, likely due in part to the upgrade. Stuart says the new cup removers are also much easier to use.
“Two years ago, we also installed an in-shed feed system to feed the cows on the platform as they are milked. Last year’s production was up 17% compared to where we were before we had that system, which we also use to add the minerals like magnesium and calcium that the cows need to stay healthy. It has definitely helped with getting cows in calf, and the cows are looking better too.

“That lift in production was achieved with 20 less cows over a slightly smaller area. It tells me that if you feed right and breed right, then they’ll produce for you. Last year we had young cows by Semayr bulls: they are doing well over the herd average and that bodes well for the future too.” Leading New Zealand-bred bull Iwa Super Sonic is one of the bulls being used to drive herd improvement, along with two top bulls out of Scandanavia, Vimo and Vesty “The calves look the business.”

Stuart is a board director with Ayshire New Zealand and serves on the national Semayr committee, which is using genomics to select sire proving bulls to go into the progeny test scheme. The goal is to keep increasing the reliability of selection and facilitating the selection of proven sires with good BVs for fat, protein and milk. He says with fewer sire proving bulls on the national bull farm this year, some members are donating or rearing bull calves for the farm to help create a revenue stream which is a way to subsidise association costs for members. 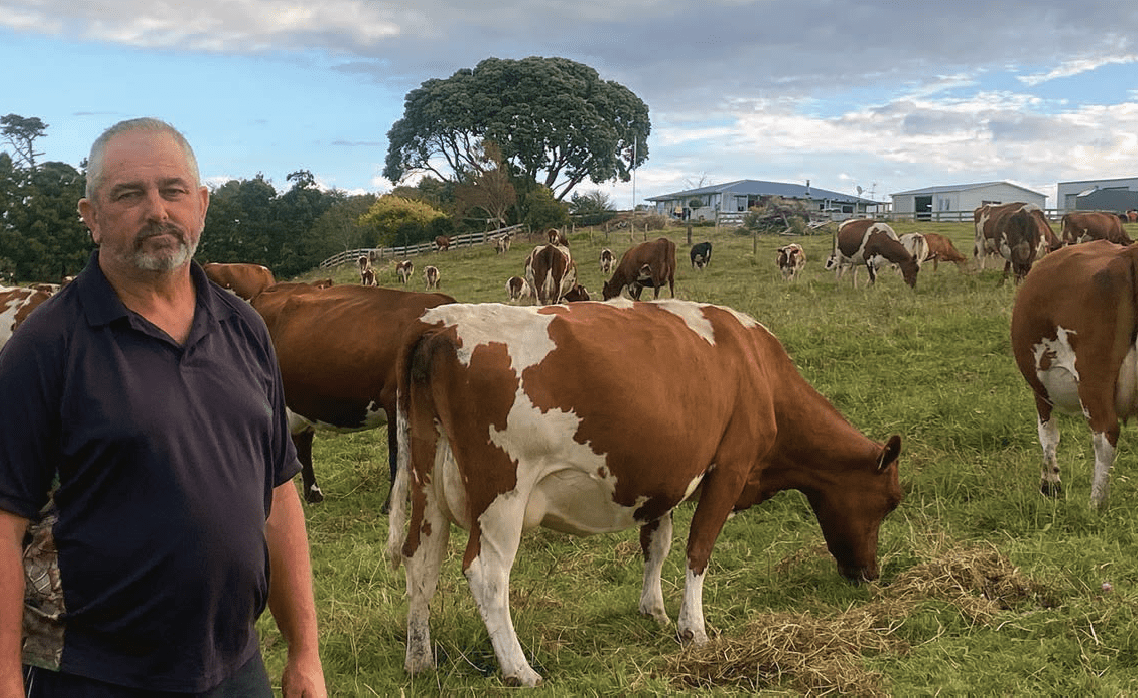 Stuart Honeyfield with his Ayrshire herd. The Honeyfield family will celebrate their 100th year on the farm, north of Waitara next year.